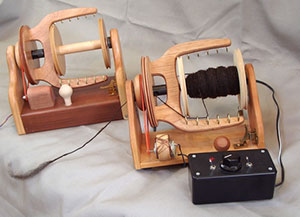 The miniSpinner story began in 2003 in Tasmania, Australia, where we spent 18 months living on our sailboat RED while we were cruising the Pacific.  Beth got interested in handspinning but a treadle wheel was too large for the boat, so I made the first prototype miniSpinner for her.  It was pretty rough, but it worked well.

In 2004 we sailed to New Zealand where we met a local spinner who wanted to purchase that first miniSpinner so I made another, better one.  That's the prototype on the right, the second version on the left rear:

Beth spun on that until 2009 when we decided to produce miniSpinners commercially.  I refined the design and electronics and sold the first one in September.  I expected to make 10 or 20 annually in my home workshop but it got a little crowded as things picked up.  I was putting in around 84-90 hours weekly during this period! 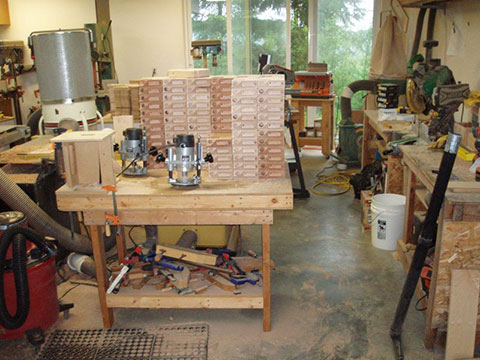 miniSpinners were quickly noticed by the handspinning community and within six months we'd hired our first employee, purchased our first Gerber Sabre 404 CNC router table, and moved into a 1,000 square foot commercial space in order to keep up with the demand.  A year later we added a second employee, a Hardinge HNC lathe, a CNC Automation milling machine, and another 1,000 square foot unit to house our rapidly expanding operation.

A handful of us work full-time to produce and ship miniSpinners and other fine products to thousands of happy owners all over the world, including Antarctica.  It seems that original estimate of 10 or 20 annually was a little low!

We've got a great staff dedicated to quality and superior customer support.  If you ever find your way to Port Townsend, give us a call and we'll organize a tour or visit!

Our business hours are Monday through Friday, 9am to 5pm PST.  If you want to stop by, please call to schedule an appointment.  We travel so much for HansenCrafts, we don't want to miss you!!